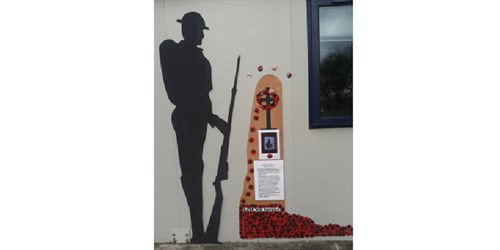 During October this year, students at Cambian Lufton College progressing towards their Duke of Edinburgh award were invited by the Royal British Legion Association to enter thier Poppy Appeal competition. They were tasked with planning and creating a locally themed Lufton poppy display.

The students walked along the lane to the local church, St. Peters and St. Pauls, to look at the grave headstones and the buildings themselves. They found a memorial to a soldier, Major. R Walker, who had died of wounds on the 5th September 1916 during the Battle of the Somme near Theiepval, France. Major Walker, who had commanded the 105th Field Company, was buried in the British Cemetery at Contay Albert close to the battlefield. A cross was put over his grave by the men of his company but later sent home to Britain, once a stone replacement had been erected in its place. 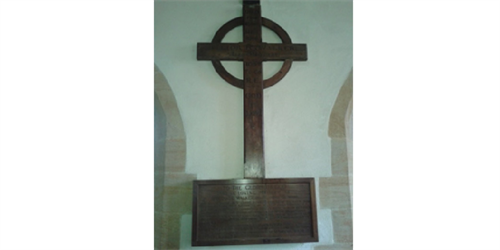 The students kept investigating, and found that Major Walker was married to a Ms. Kathleen Vanetta who, after his death, went on to marry his great friend Lt. Colonel David M Griffiths DSO RE. They had lived at Lufton House, next to the church and Mr. Griffiths held his career there as church warden for 22 long years.

Our young people used this great story, working long and hard cutting out the poppies and assembling the finished piece outside the Duke of Edinburgh classroom. The students also met with a local historian to gain more insight into the story they'd uncovered. 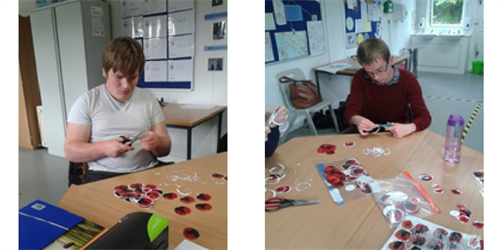 Having sent an email to the Digby family (descendants of the Major's wife), their archivist kindly forwarded a photo of him to add to the display.

Local representatives have since visited Cambian Lufton College to judge the competition and we're all keeping our fingers crossed for a good result!