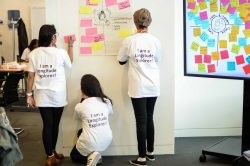 Three computing students from Southlands School in Boldre, Lymington were thrilled to discover that their entry into the Longitude challenge prize had made the final.

The competition was launched in January 2017 and called for secondary school pupils aged 11-16 to develop innovative, practical solutions using the Internet of Things (IoT) to help improve the health and wellbeing of people in the UK.

The STEM competition is organised by innovation research foundation Nesta and supported with funding and resources by IBM UK. Over 60 ideas from more than 220 young people were submitted and assessed against the judging criteria to determine which had the most potential and should be shortlisted for a chance to win the £10,000 prize with two other schools receiving the runners up prize of £1000.

The IoT idea developed by the students is for a biometric wearable device that changes colour to help communicate emotions. There ideas came from investigating the natural world as well as the fast developing world of microchips like Arduino and Raspberry Pi computers. Head of Computing Guy Strath explained, “Research into biomimicry led the students to look at intelligent cephapods like octopus and cuttlefish that changed colour to communicate to their peers.

The students drew a parallel with the same way we may use emoticons or emoji’s in social networking. This also led to their project name Octoptix.” The team of students now have the task of bringing their idea to prototype with the support of IBM technology and business mentors. To prepare for presenting the project idea at IBM headquarters in London the team visited local Lymington microchip design company Embecosm. Jeremy Bennett, The CEO, of Embecosm has always been very supportive of Southlands School and welcomed the chance to give feedback to the students on their idea.

This feedback proved invaluable. Transition Manager Rebecca Sheen was keen to add: “We are very fortunate at Southlands School to have such a wide range of local businesses who are keen to offer valuable work placements. Over the years we have built up strong relationships with Embecosm and a number of other IT businesses including IBM which have enabled our students to develop both socially and educationally through work related learning.

Jeremy is always keen to be involved in projects that we run and is such an enthusiastic person!!”Southlands School established itself as the first residential school in the United Kingdom (UK) for students with Asperger syndrome and is part of the Cambian Group, one of the UK's leading providers of specialist services in education and care for young people with autism spectrum disorders (ASDs).

Karen Gittins, Head at Southlands School, was quoted to say ‘ I am delighted that our students have made the final of The Longitude Explorer Prize, we are so proud of them. We will be keeping our fingers crossed for the final in July. They really do deserve success due to their commitment and enthusiasm undertaking this project.’